Yesterday I showed you guys some of the non-ya book November releases and today I’m focusing on the YA and middle-grade book releases of December 2018. There are some really awesome and pretty books coming our way in December. Among another, one of my most highly anticipated books of the entire year! It put in several pre-orders and can’t wait to receive them! Curious to see which books I want to show you guys? Continue reading…

I came across this Science Fiction/Dystopia book and the synopsis sounded really intriguing. Aside from that, the early reviewers have been incredibly positive about this book, which just makes me really excited to add it to my wishlist. It promises to be a good one so I can’t wait to find out for myself what I’ll think about it.

How far will they go to restore the power?

It’s been lights-out for three months and society is already falling into chaos.

Teenage tech-genius Simon Harper and his team of fellow gamers have been searching for the cause of the outage since it went down. Simon and his twin brother West are often at odds, but when the key to restoring power drops into their hands, they’ll risk everything and join forces to bring it back.

Descend into an epic, young adult adventure, featuring family and friendship with a heart-skipping side of romance by debut authors Deborah Adams and Kimberley Perkins.

Mysterious deaths and disappearances are piling up, and unknown enemies are everywhere. As the brothers make their 500-mile journey to Waypoint they’ll have to decide who they can trust, and which secrets can be told.

This is my most anticipated December release and one of my most anticipated 2018 release in general. Aside from Kingdom of Ash, this is probably THE most anticipated release of 2018 to be honest haha. I’ve been a shadowhunter fangirl at heart for years now, even before I discovered the Throne of Glass perfection and the shadowhunter world will always remain special to me. This particular trilogy has been so insanely well written so far. Lord of Shadows is one of the best books Clare has written to date in my opinion. It’s definitely in the top 3 alongside Clockwork Princess and City of Heavenly Fire. So to say I’m anticipating the release of QoAaD is an understatement and the expectations are set high. I’m scared though, aside from looking forward to this release, because Clare is so good at writing final installments and they are always so frigging emotional. After reading Lord of Shadows and knowing this upcoming release ‘will change the Shadowhunter world forever’ I don’t know whether to cry or to be excited, lol. I’m legit scared… This book is just as Kingdom of Ash; it’s going to destroy it, I just know it.

This book has been on my to-read list for quite a while now. It has dragons and heists? Count me in! I’ve tried not to let myself get impacted by the negative reviews that are already out there because I don’t want to get influenced too much beforehand. The synopsis sounds awesome and I’m really excited about reading this book in the, hopefully nearby, future.

In Sky Hawkins’s family, leading your first heist is a major milestone–even more so than learning to talk, walk, or do long division. It’s a chance to gain power and acceptance within your family, and within society. But stealing your first treasure can be complicated, especially when you’re a wyvern–a human capable of turning into a dragon.

Embarking on a life of crime is never easy, and Sky discovers secrets about her mother, who recently went missing, the real reason her boyfriend broke up with her, and a valuable jewel that could restore her family’s wealth and rank in their community.

With a handpicked crew by her side, Sky knows she has everything she needs to complete her first heist, and get her boyfriend and mother back in the process. But then she uncovers a dark truth about were-dragon society–a truth more valuable and dangerous than gold or jewels could ever be.

I’ve received an e-arc of this book a while ago but haven’t found the right time to read it yet, but I’m planning to do so soon. It has mental health issues being part of the story and the synopsis makes it look like it’d be a really interesting read. As someone who has social anxiety issues herself, this book is probably going to be an emotional read I think. We’ll see.

I haven’t left my house in over a year. My doctor says it’s social anxiety, but I know the only things that are safe are made of paper. My room is paper. My world is paper. Everything outside is fire. All it would take is one spark for me to burst into flames. So I stay inside. Where nothing can touch me.

Then my mom hires a tutor. Jackson. This boy I had a crush on before the world became too terrifying to live in. Jackson’s life is the complete opposite of mine, and I can tell he’s got secrets of his own. But he makes me feel things. Makes me want to try again. Makes me want to be brave. I can almost taste the outside world. But so many things could go wrong, and all it takes is one spark for everything I love to disappear…

All the Wandering Light by Heather Fawcett
(Even the Darkest Star #2)
Release date: December 4th

I’ve read the first book in the series right after it’s release. I’ve had some remarks on the book but overall it was really enjoyable. Enough so, that I definitely want to buy and read this sequel! So it’s very high up on my wishlist! To not spoil you guys, I’ll put down the synopsis of the first book, Even the Darkest Stars:

Kamzin has always dreamed of becoming one of the Emperor’s royal explorers, the elite climbers tasked with mapping the wintry, mountainous Empire and spying on its enemies. She knows she could be the best in the world, if only someone would give her a chance.

But everything changes when the mysterious and eccentric River Shara, the greatest explorer ever known, arrives in her village and demands to hire Kamzin—not her older sister Lusha, as everyone had expected—for his next expedition. This is Kamzin’s chance to prove herself—even though River’s mission to retrieve a rare talisman for the emperor means climbing Raksha, the tallest and deadliest mountain in the Aryas. Then Lusha sets off on her own mission to Raksha with a rival explorer who is determined to best River, and Kamzin must decide what’s most important to her: protecting her sister from the countless perils of the climb or beating her to the summit.

The challenges of climbing Raksha are unlike anything Kamzin expected—or prepared for—with avalanches, ice chasms, ghosts, and even worse at every turn. And as dark secrets are revealed, Kamzin must unravel the truth of their mission and of her companions—while surviving the deadliest climb she has ever faced.

With the Walking Dead being such a hit ever since it released on the TV, it was bound to happen that there’d be more Zombie books coming our way. I’ve had some YA zombie books on my wishlist for ages now and still haven’t gotten around to buy and read them yet. And now I found another one that I want to add to my wishlist haha! This December release sounds really awesome!

Ever since her mother’s death, Gabriella “Gutsy” Gomez has spent her days flying under the radar. But when her mother’s undead body is returned to her doorstep from the grave and Gutsy witnesses a pack of ravagers digging up Los Muertos—her mother’s name for the undead—she realizes that life finds you no matter how hard you try to hide from it.

Meanwhile, Benny Imura and his gang set out on a journey to finish what Captain Joe Ledger started: they’re going to find a cure. After what they went through in the Rot and Ruin, they think they’ve seen it all, but as they venture into new and unexplored territory, they soon learn that the zombies they fought before were nothing compared to what they’ll face in the wild beyond the peace and safety of their fortified town.

The Fork, the Witch and the Worm: Eragon by Christopher Paolini
(Tales from Alagaësia #1)
Release date: December 31st

I’ve read and fell in love with the Inheritance cycle books years ago and to find out there are short stories coming our way set in Alagaësia has made me one frigging happy fangirl. I cannot wait to read these short stories!

These stories take place 1 year after the happenings in book 4 of the Inheritance Cycle so I won’t put down the synopsis here because there are some spoilers written into it and I don’t want to spoil anyone if you haven’t read the IC books yet. This book includes 4 new pieces of art by the author so that makes me so excited as well since I love his artwork! 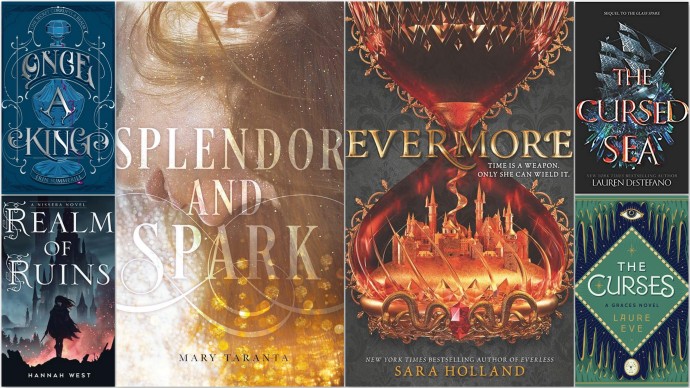 I have to say though, that I find December’s releases not As spectacular as the releases of the past months, except Queen of Air and Darkness – but maybe I’d feel different if I’d read more 2017 release so I could anticipate the sequel releases of those in December haha. Sure, there are definitely some books I’ve added to my wishlist and I’m excited about, but other than QoAaD there isn’t one I REALLY really really want to pre-order persé, you know? Whereas I normally have to hold myself back so I don’t buy too much haha.

Are there any YA/ middle-grade releases you pre-ordered or at least put on your wishlist or something? Any of these you’ve already read and reviewed and would recommend? Love to hear what you’re looking forward to!

I’m Melissa, an enthusiastic 29 year old Fangirl, Wife and Mommy living in the Netherlands. Reading is my superpower and I love writing reviews and other bookish articles. But there’s more to find on here as well; I sometimes talk about movies/tv series as well as some more personal stuff.