I was in search of a Friday meme article and came across this one over at Tenacious Reader’s blog and fell in love at the spot.

| What kind of article is Friday Firsts? |

It will feature the first few sentences/paragraph of my current book and my first impressions as well. It’s meant to be a quick and easy way to share a bit about what I am reading, and I would love to hear others join in sharing their current reads as well.

The format is really simple. Include a quote. Include first impressions, it will not be a long drawn out analysis of the text or grand speculation of what is to come. Just a brief overview of how I’m feeling about the beginning of the book. 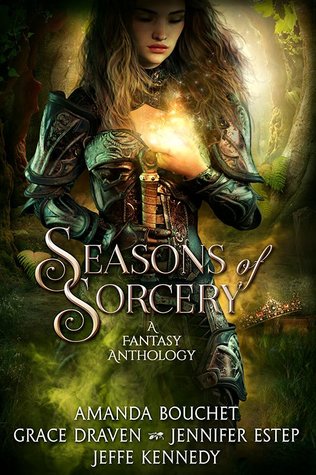 About Seasons of Sorcery:

An assassin at a renaissance faire. What could possibly go wrong? Everything, if you’re Gin Blanco. This Spider is trapped in someone else’s icy web—and it seems like they don’t want her to leave the faire alive . . .

A CURSE FOR SPRING BY AMANDA BOUCHET

A malevolent spell strangles the kingdom of Leathen in catastrophic drought. Prince Daric must break the curse before his people starve. A once-mighty goddess trapped in a human body might be the key—but saving his kingdom could mean losing all that he loves.

THE DRAGONS OF SUMMER BY JEFFE KENNEDY

As unofficial consort to the High Queen, former mercenary Harlan Konyngrr faces a challenge worse than looming war and fearsome dragons. His long-held secrets threaten what he loves most—and he must make a choice between vows to two women.

A WILDERNESS OF GLASS BY GRACE DRAVEN

The stretch of sea known as The Gray rules the lives of those in the village of Ancilar, including widow Brida Gazi. In the aftermath of an autumn storm, Brida discovers one of the sea’s secrets cast onto the shore—a discovery that will change her world, mend her soul, and put her in the greatest danger she’s ever faced.

I stared at my reflection in the mirror above the long counter that ran along the wall. Even though I had been peering at myself for the better part of a minute, I still couldn’t believe what I was seeing.
Normally, my wardrobe could be best described as functional. Black boots, dark jeans, a long-sleeved t-shirt, a fleece jacket if the weather was cold. I never invested a lot of time or money in my clothes, since they had an annoying tendecy to get ripped, torn, and covered with other people’s blood.
But today I had left functional behind for flamboyant.
A royal-blue silk blouse with ruffles running down the front stretched across my chest. As if the color wasn’t bright and bold enough, the entire garment was also covered with shiny thread, glittering sequins, and tiny feathers, all in black. I looked like I’d killed a couple of crows and was proudly wearing their fluttering feathers as some sort of macabre tropgy. Plus, the sequins caught the light with every breath I took, and they winked at me in the mirror like dozens of little evil eyes.
But that was only the beginning of my unfortunate ensemble.

So, the first paragraph of Chapter 1 doesn’t tell much as to what the story is about, but I find the writing quite pleasant right away and it definitely made me want to continue reading this story. I think the first chapter of a book/story is quite important. And not its content persé. But especially seeing and finding out how the writing is done since that’s what most often is the thing that ‘lures me in’ you know?

At the moment I’m still reading this first story of 4 that are to be found in this anthology; Winter’s Web by Jennifer Estep. I had no problem whatsoever to get ‘into’ the story. Even though I’m not familiar with this world – I came to the understanding that this novella is set into a world that this author has written about already – I don’t feel like missing out on anything yet so that’s a positive sign. At this point, there isn’t much to tell except that it’s a nice writing style and I’m excited to continue reading.

What are you reading right now and did it start out good or not? What are your first thoughts about your current read? Love to hear from you.